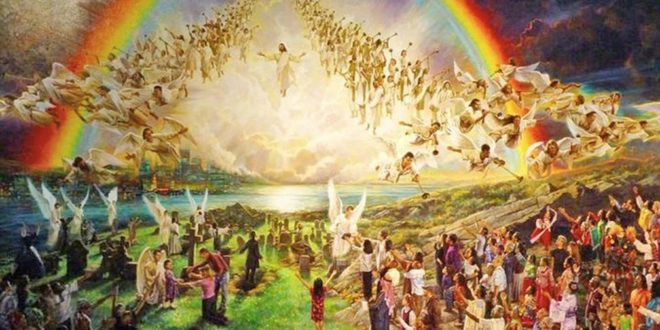 In Kingdom Now and Dominion theology, the Locusts of God is a metaphor for Joel’s Army - a deadly plague sent by God that is now manifesting as a growing cult in America with a good part of it in Oklahoma and Texas.

While some members of a radical group seeing themselves as abortion abolitionists are storming churches in Oklahoma with graphic posters of aborted fetuses and screaming that the others aren’t true Christians, they’re also secretly organizing as a dangerous Domionion theology cult.

The dogmatic religious extremism adherents with Abolish Human Abortion have been terrorizing school children and young women on college campuses. Most of the targets they stalk are innocents that have nothing to do with the abortion issue, as some of them are as young as middle schoolers just trying to attend class.

The same members of the AHA in Oklahoma, also belong to the new Dan Fisher group Free the States Now and the Ekklesia of Oklahoma, which is where the rabid Dominion theology cult has planted its feet.

Ekklesia is an ancient term Greek term derived from Ecclesia that can have as simple a meaning as church congregation. However, the Ekklesia of Oklahoma do not belong to any formal church body in the state. They are instead looking for a property large enough to house their cult. It appears the cult compound could show up somewhere between OKC and Guthrie as that’s where they’re searching.

Their cult is based in Dominion theology, also known as theonomy, dominionism, and Christian reconstructionalism.

They obtain their beliefs from Genesis 1:28, which in the KJV says, “And God blessed them, and God said unto them, "Be fruitful, and multiply, and replenish the earth, and subdue it: and have dominion over the fish of the sea, and over the fowl of the air, and over every living thing that moveth upon the earth."

Grant is actually one of their more rational influences, if that word can be applied to this cult.

The Integration of Theory and Practice by Eric Heubeck has been called “Paul Weyrich’s Training Manuel and a manifesto for dominionism.”

Our movement will be entirely destructive, and entirely constructive. We will not try to reform the existing institutions. We only intend to weaken them, and eventually destroy them. We will endeavor to knock our opponents off-balance and unsettle them at every opportunity. All of our constructive energies will be dedicated to the creation of our own institutions.

We will use guerrilla tactics to undermine the legitimacy of the dominant regime.

The manifesto states that the takeover process will occur in three stages: developing a “highly motivated elite able to coordinate future activities,” developing “institutions designed to make an impact on the wider elite and a relatively small minority of the masses,” and transforming “the overall character of American popular culture.

Weyrich wrote a sterling endorsement on the book jacket of Nobility and Analogous Traditional Elites in the Allocutions of Pius XII: A Theme Illuminating American Social History. The book is considered a must read for those in neo-confederate, Christian Identity, and white supremacy circles, who wish to bring back the glory days of slavery and an elite class of nobility overseeing the lives of everyone else. This is considered very much in line with the first stage “highly motivated elite able to coordinate future activities” of the dominionist takeover.

In order to bring Christ back to Earth, the Dominionists believe they must take dominion of the Seven Mountains: Education, Religion, Family, Business, Government and Military, Arts & Entertainment, and the Media.

Those spheres of influence can be seen on their website and Facebook page of the Ekklesia of Oklahoma, as well on the banner they’re using.

Their more radical beliefs are sanitized down on their public pages in order to draw in unsuspecting parties, who may then be indoctrinated into the cult.

Ardent cultists believe in a return to the Hebrew Code from the Old Testament and changing the United States into a Christian Dominionist Empire. This would allow them to do such things as execute homosexuals and return to slavery.

For these believers, Jesus will not come to them while homosexuality exists on earth. Thus they must cure or destroy it in order to beckon their savior and gain their own salvation. Their philosophy gives homosexuals the opportunity to change, but failing that the homosexual would be liquidated.

In conjunction with taking control of the federal government where they would work to amend the United States Constitution to oppress gays, strive to remove the separation of church and state, and have biblical code be deciding factors in U.S policy in areas like relations with Israel, these groups use their members to advance pro-dominionist agendas in state government. Their current early focus is in placing biblical code such as the Ten Commandments into classrooms and courthouses, removing gay supportive literature from libraries, eliminating abortion, denying gay rights and making gay behavior into criminal offenses, militarizing Christian groups, and forcing the teaching of creationism and prayer in schools.

Demon-fighting Dan Fisher, Randy Brogdon, and the Abolish Human Abortion are already meeting to plot how they will influence the state legislature this year. Hate Trackers revealed those plans earlier today in another report.

Their anti-abortion activities include:

Identifying the children of lawmakers and where they attend school in order to send bands of Abolitionists to confront the children after school.

Staking out Planned Parenthood and women's health clinics to record license plates, take photographs of people entering the facilities, and follow such people home to identify their addresses.

Dominionists harbor apocalyptic “Left Behind” fantasies where they will have to do physical battle with Satan’s Army, so are collecting weapons at this point.

Hate Trackers is identifying the three men in charge of growing the Dominionist cult in Oklahoma. They are: Daniel Navejas, Kyle Brown, and Isaac Rodriquez.

We will be focusing on them in Part II of this extended report.

Hate Trackers is releasing a major report in multiple parts linking a Dominion theology cult, their plans for Oklahoma, and their ties to a domestic terrorist training camp in Big Sandy, Texas that is being funded by the Greens of Hobby Lobby. That camp is located on the grounds of a former college campus. Just this week Hobby Lobby announced the purchased of the St. Gregory’s campus in Shawnee, which could be the start of another of their Locusts of God cells.

You can help us exposed groups like these with your financial support.